Easily one of the most picturesque and charming areas in the world, 5 days was definitely not long enough for San Francisco! Once you visit, you will find it truly difficult to tear yourself away from this enchanting part of California. 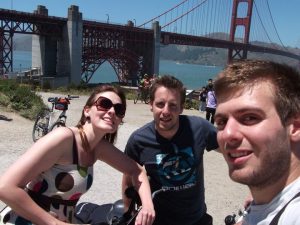 It should be noted that San Francisco is distinctly different to the rest of California. With the water as cold as the beaches in Norwich and a hippy lifestyle often seen in Brighton, San Francisco was a distinctive contrast to LA.

Cycling across the Golden Gate Bridge will be one of the highlights of my life I will always remember. Starting quite a distance from the bridge, you get the chance to cycle across the beach-side pavement, looking at the beautiful structure getting ever closer. As you begin to cycle across the bridge you really realise that it would be better walking as you have to delicately cycle through the crowded path way for the entirety of the bridge!

One point to note, which I’m sure many of you will roll your eyes to and laugh under your breath, however I was not aware that the Golden Gate Bridge is not actually golden…I know, I’m quick of the mark! The bridge was a shade of red, like a baboon’s ass. Not that this took anything away, in fact I thought it was the nicest bridge I had seen all year, or at least in the top 3.

The bridge also has an eerie feel to it, as it was always flooded in a field of fog (enough f’s for you?) blown in from the Pacific cold 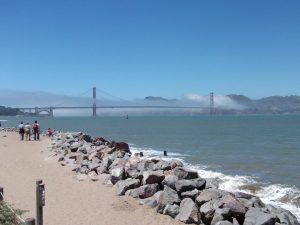 Once we arrived on the other side of the bridge, a happy grin grew across my face as I realised I was at the top of a fairly steep hill, demanding me to speed down at full pace. Met by a very small shopping town I did not expect to find, I managed to get all my souveniers (which were squashed instantly into my bag) from a unique toyshop. This was a toyshop where you wouldn’t find the usual action man/barbie style toy, this was more along the lines of Studio Ghibli, Pokemon, the Moomins, Dr Seuss etc.

We then ate an ice cream while looking out at San Fran and wondering whether we would ever return to this blissful (but expensive) place. Seeing the sun start to settle, we began my cycle back up the hill and across the Golden Gate Bridge. The entire journey took about 4-5 hours, so definitely give yourself plenty of time, as we felt a bit rushed due to leaving our friends on the beach earlier in the day to make this adventure. Also, with it being such a long journey, and with prices so high, it is worth packing a rucksack with enough snacks to feed an entire army of meerkats!

To the left of the Golden Gat Bridge (on the San Francisco side of the bridge) there is an amazing beach where you can relax and jump the waves with the mind blowing view of the bridge.

Random fact…The bridge is so long that it requires continuous paint work, as once they finish on one side, they must start again from the other side. Talk about job security! This was one of those facts we learned over there, but there were so many interesting points that popped up from locals to tour guides. For example, there was a lot of negativity surrounding the building of this bridge, with 2,300 lawsuits being aimed at the constructors, with the biggest coming from the Ferry company that would undoubtedly see their sales decline drastically. Another fact was that the cables used on the bridge were by the same company that made the ones for the Brooklyn Bridge, their testimonial page must be immense!

The following day was spent at Alcatraz, the infamous prison which nobody could escape from alive.

As mentioned, if you want to hire a bike in San Francisco then there are plenty of options available to you. Some of the biggest names are San Francisco bicycle hires, Golden Gate Bridge Bike Rentals or Basically Free Bike Rentals. All have high credentials and are known in the area, while the first and third are a short walk from each other.