A few months on, I thought it would be interesting to write about my experiences in getting a nipple piercing, my recommendations and the sad premature ending of my nipple buddy. While a little bit tipsy, to say the least, I found myself in a tattoo parlour in Budapest with a really strong urge to get a nipple piercing, feeling rebelious, in the knowledge that it was only a 4 day holiday rather than my original plan to disappear off around the world. With that thought in mind, I lay myself down, stripped my top off and got ready for the needle.

The first thing that surprised me was that it was actually done by needle, I always it was assumed it was done by a gun, which I have seen happen a couple of times in England, so whether this was based on the geographical location or whether this is just the way it happens, it still took me by surprise. The pain was quite bad, however it really only lasted for like 5 seconds, compared to getting a tattoo, which is like an hour of constant pain. I will never understand people that enjoy pain, but I commend them and tip my hat, as both the tattoo and the piercing were less than fun experiences while in the moment. 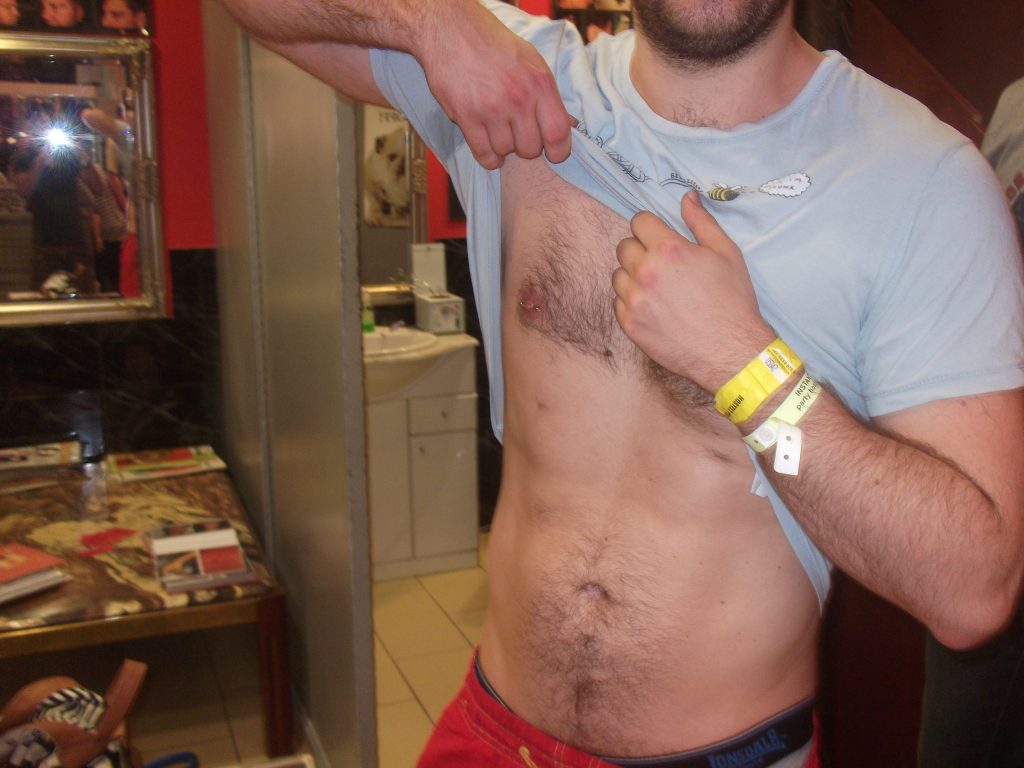 once you leave, you won’t feel too much pain, but more an irritation as every time your top touches the piercing, which is constant, you get a burst of uncomfortabless (that definitely isn’t a word, but I’m going to go with it).

Ignore half the people you meet who recommend cleaning the piercing with all types of things, as half of these are actually the reason why people get infections. All you really need is sea salt and hot water. Wash the piercing twice a day, morning and night, and you should stay clear of any worries. Also give it a rinse in the shower, but make sure not to touch it or irritate it. It might sound odd, but I used a shot glass with hot water and salt to clean the piercing, holding it up over my nipple for a couple of minutes. MAKE SURE you use sea salt, if you use table salt or anything else then you’re going to have a bad time.

Remember not to swim or have baths for a good while after the piercing, as bath tubs tend to collect bacteria, while all kinds of crap could be in the water you’re swimming in.

Sadly one day the ball fell out for me, and later on I accidentally knocked out the whole piercing. Not wanting to put it back in myself (they recommend going back to the piercing parlour where they can cleanly put it back in) I left it and it was sealed back up within a day. If it does fall out for you, don’t try and fix it yourself, but run straight to the piercing parlour as it doesn’t take long to seal back up. Also maybe give it a clean if it has been rolling around all over your floor.

I hope that comes to use for anyone out there who plans on getting a nipple piercing, it was great fun and I do miss it now it is gone.