Hands down the most odd thing I have witnessed while in South America, the cholita wrestling is a cheap thing to do if you find yourself bored on a Sunday night. It only costs 80 Bolivianos (£8) while you can be picked up from the hostel and book it directly from the reception, while it takes place every Sunday. 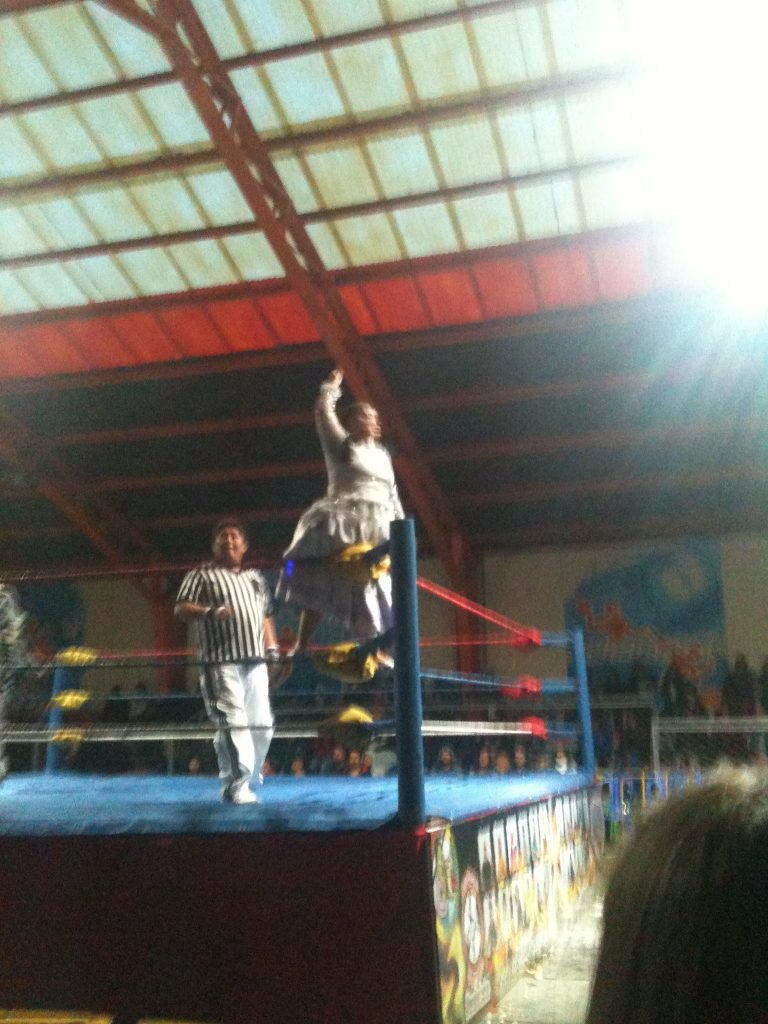 You are picked up at 3:30pm and are returned to your hostel around 7:45pm. The wrestling is incredibly fake and a wee bit childish, however it is great fun and I’m happy I went. I do reckon it would be better if I spoke Spanish however, as the plot was a bit hard to follow, however you get the general idea.

When you get dropped off outside the arena, you are right at the top of La Paz, with an amazing overview of the city, offering some great photos as you can see below: 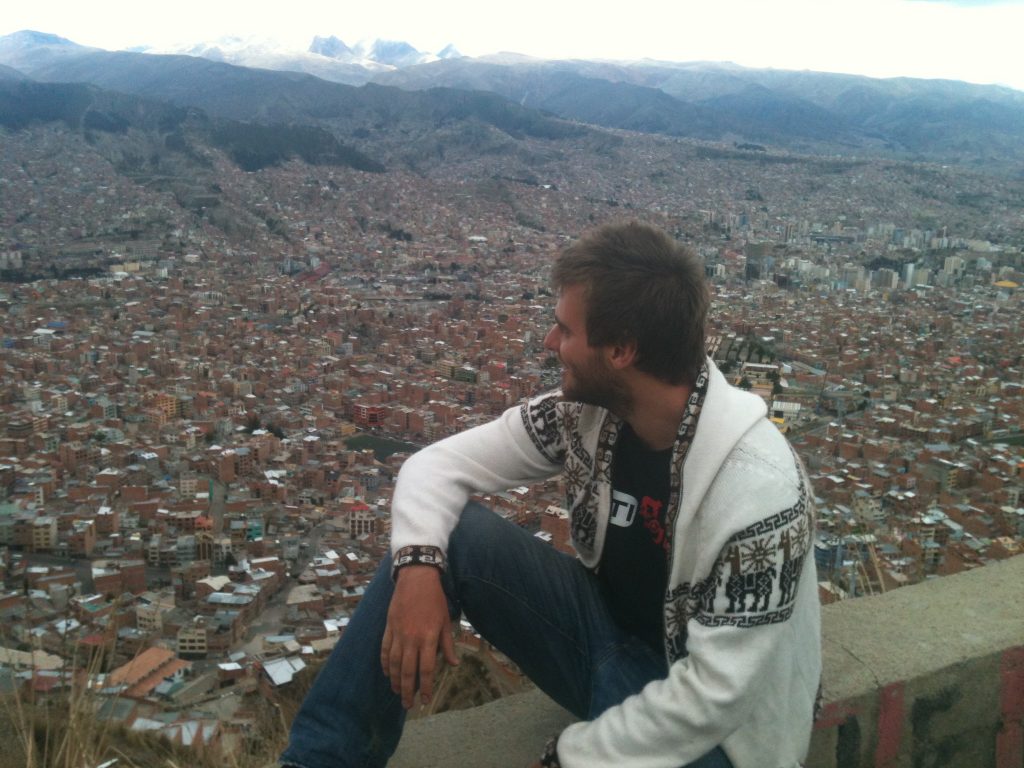 With the tickets you also get the bus journey to and from the venue, as well as some popcorn and a bottle of water. 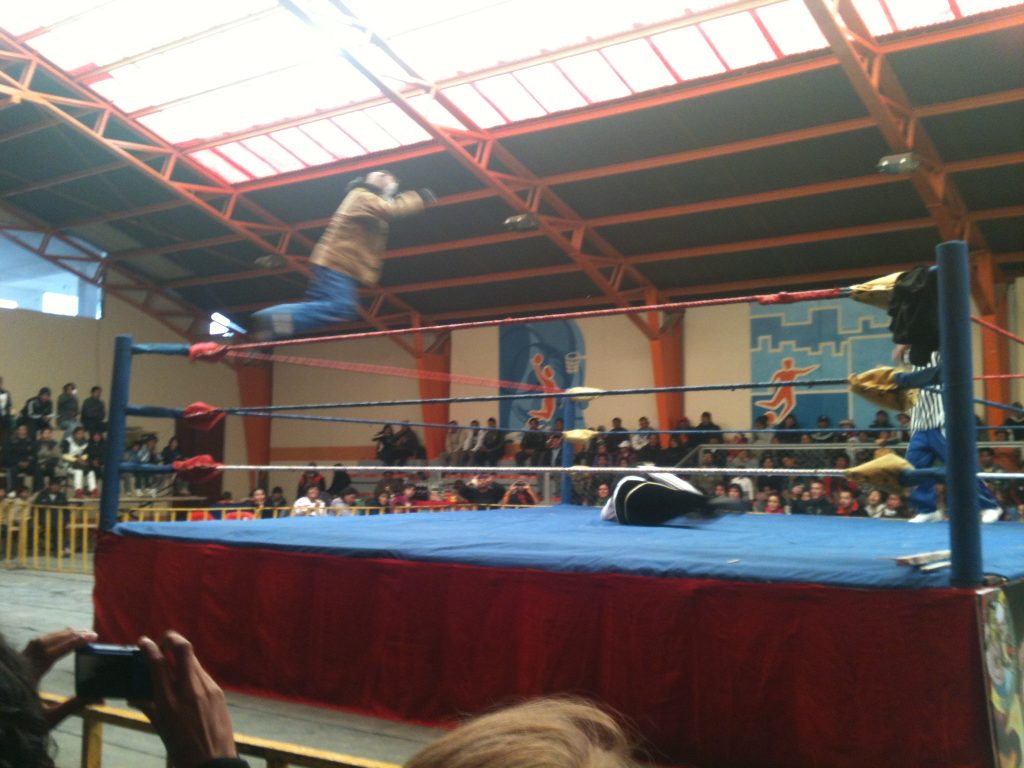 I believed the popcorn was for eating, however much to my surprise, it was actually meant for throwing at the wrestlers, or that is what I presume going by the audiences reaction to the ‘bad guys’.

In fact, some of the audience almost seemed to take it a bit too far as all kinds of things were chucked at the wrestlers, who are really just acrobatic entertainers, so I did feel for them when they were showered in food and plastic bottles. 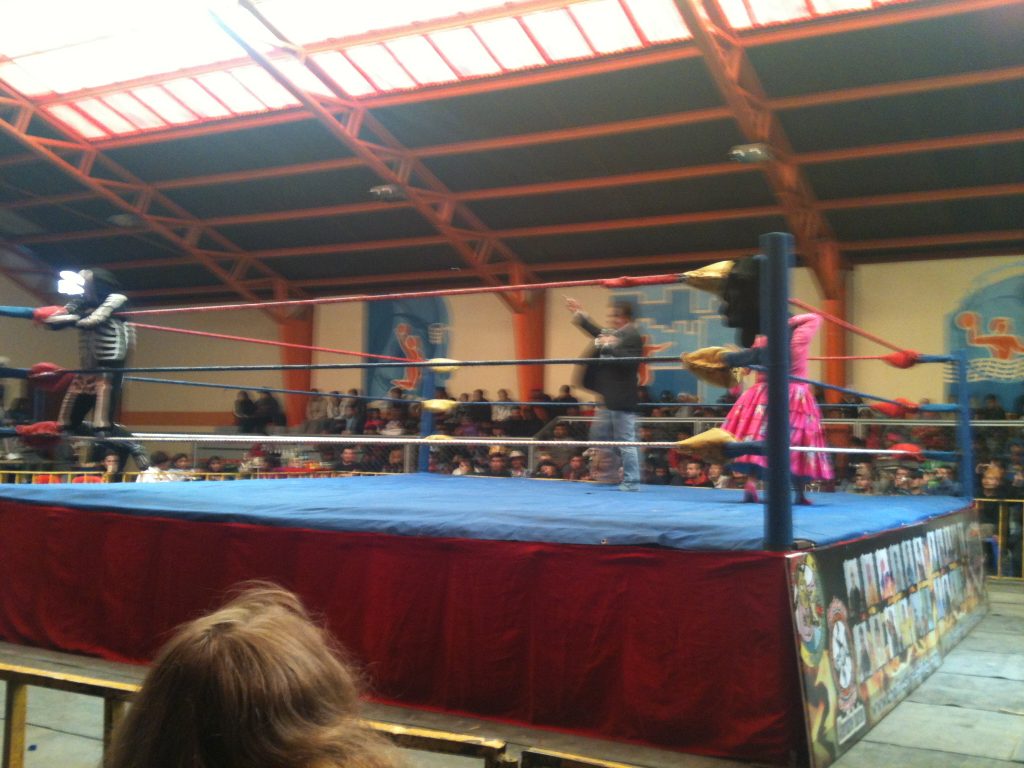 Some of the best fights were the cholita women wrestling in traditional Bolivian clothing, however there were some absolutely bizarre fights, such as Freddy Kruger against what appeared to be the girl from the grudge. I’m not going to lie, confusion was the greatest emotion. 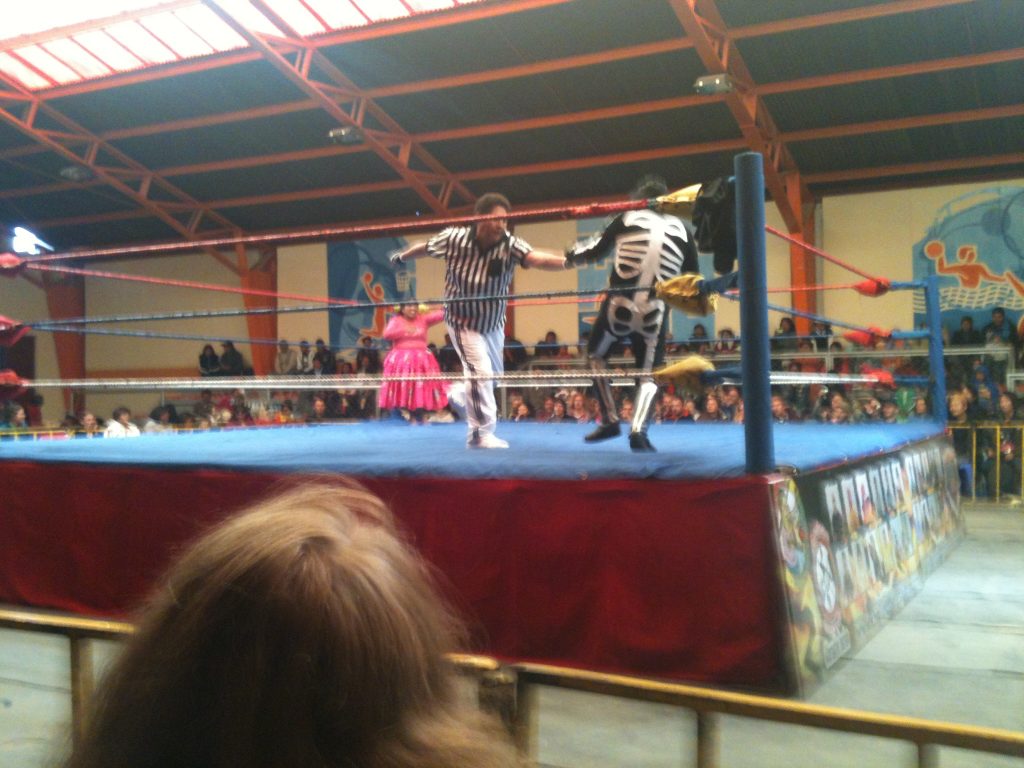 I would definitely recommend giving Cholita wrestling a try if you’re in La Paz, however it does go on a bit too long, therefore it might also be worth sneaking off half way through.

Half way through the night, you can climb up into the ring and catch some pictures of yourself performing wrestling moves. It got a bit overcrowded so if you are doing it, run straight in and get your picture. I performed a move on my mate George, which was meant to be fake but was accidentally real…my bad. 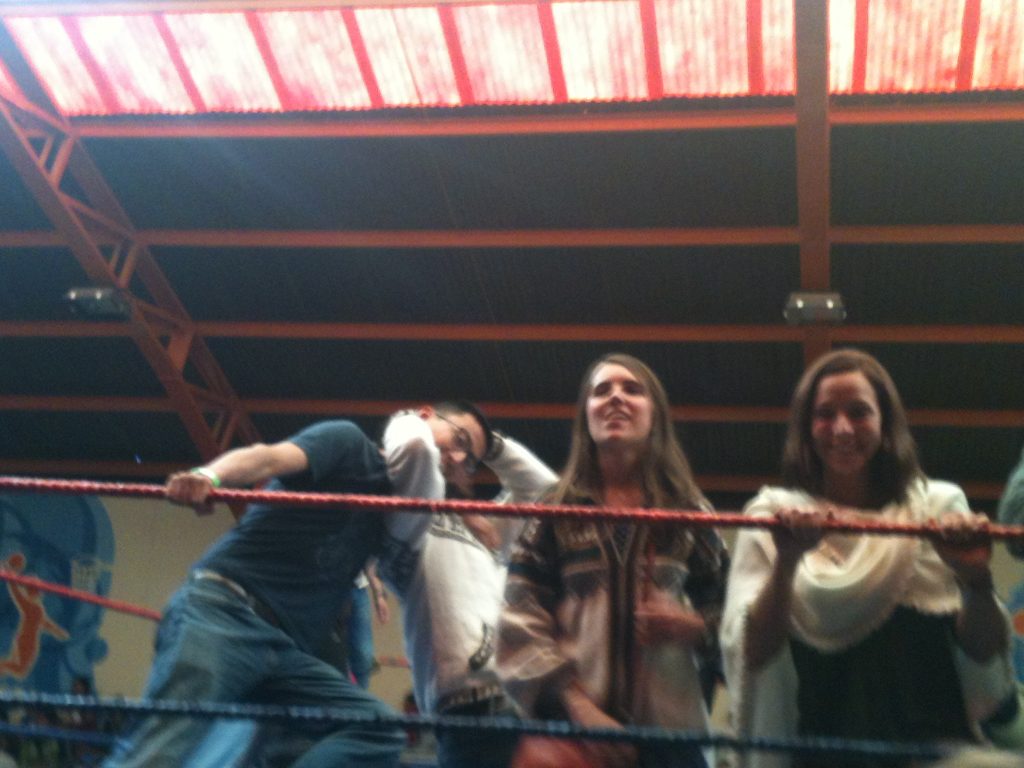 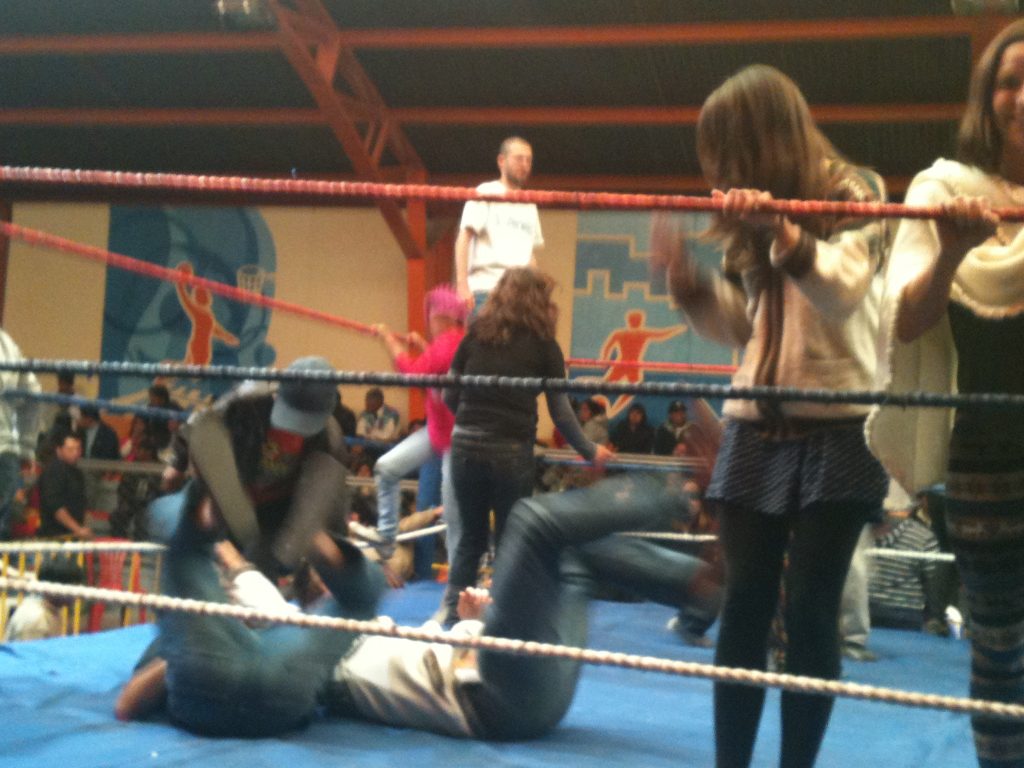 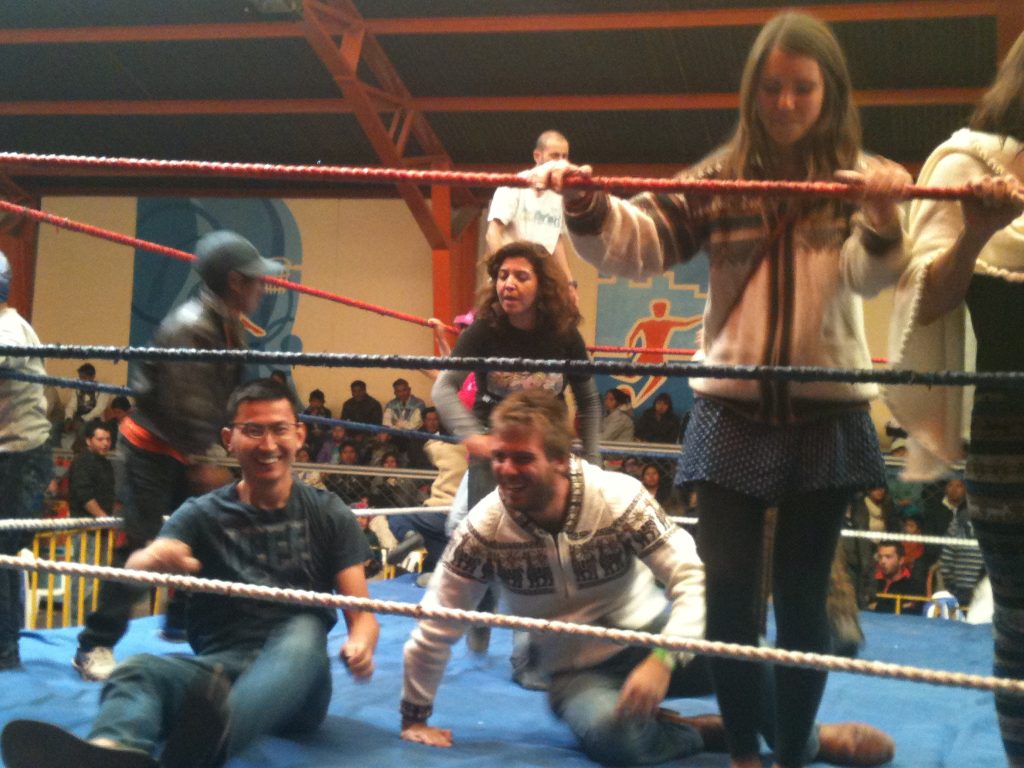