Miami held many bizarre experiences for us, from para-sailing and a mad nightlife, to shooting a gun and being mugged by a prostitute! This story has to be one of the top ones however. Taking a random search for people in Miami on Couchsurfing, we came upon a post made by Ana Samayoa about helping save the life of a beached pilot whale.

While we had been going out clubbing quite a lot in Miami, we were also keen to complete as many life experiences as possible and tick items of our list of things to do before we die. Saving a beached Pilot Whale from death definitely stood up as a life experience, and as animal lovers we felt keen to help. A lot of people can say they’ve swam with dolphins, but this was something different.

Meeting Ana, we began the drive down to the Keyes. We had heard a huge amount about the Keyes in Florida, which are supposed to be beautiful with some of the most picturesque beaches available. We didn’t get to see the beaches properly unfortunately (due to the time of arrival), however we certainly experienced the mosquito’s!

We arrived at 11pm and signed a few forms, before undressing and literally coating ourselves in mosquito spray. The one spot I forgot to spray was my left foot and when I looked down I literally found around 12 mosquito’s eating my foot apart. Even when slapping the life out of them, they would be instantly replaced by new mosquito’s.  I pretty much became Big Foot after this trip, however it was worth it!

We put on the wet suits and walked over to the water and slowly approached the Pilot Whale. At all times, the pilot whale required 3 people to hold it up; one near the back and two on either side of the blow hole. The pilot whale was strong enough to hold itself up, however every time it breathed it required us to hold it up so that it didn’t sink below the water and drown. Normally Pilot Whales can go 45 minutes between each breath, however due to the injuries abstained by the whale, it had to breath every five minutes. We therefore had to keep our arms underneath it at all times so we were prepared. 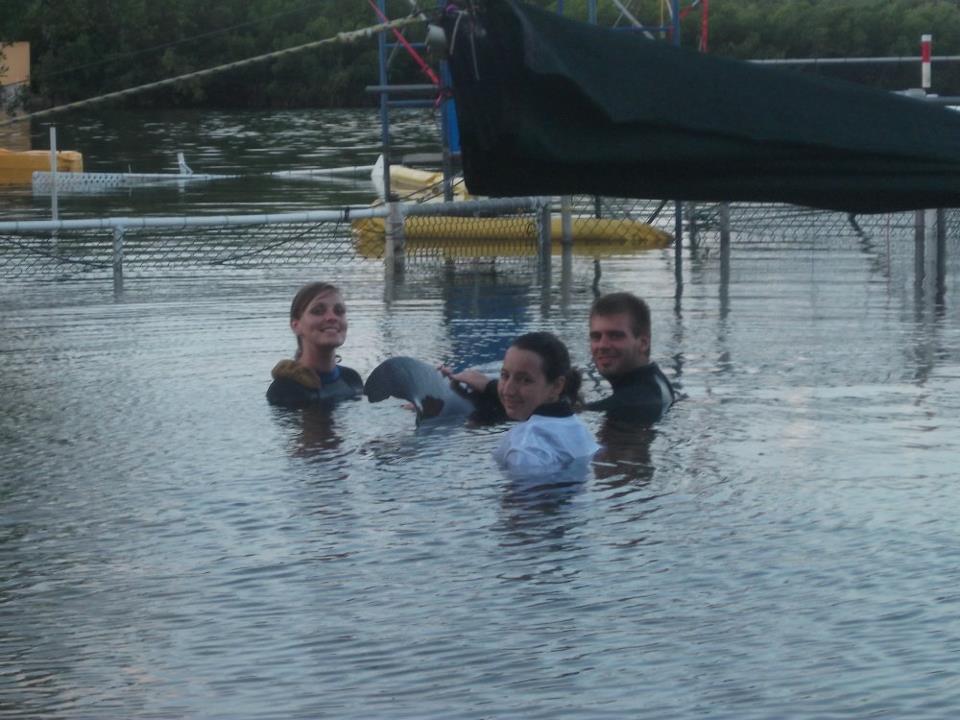 Pilot Whales are notoriously unfriendly to other beings and you would stand a fair chance of being attacked by one if you were out at sea and came to close. Contradictory to all this, the Pilot Whale had made friends with one member of staff, the guy who was there all day and night and cared a huge amount about the whale. He would regularly put his hand in the whales mouth and tickle its tongue, something not highly recommendable unless you would prefer one hand. However you could feel how excited the whale got as it moved excitably every time the guy came close.

We swapped positions regularly, the person at the back holding the most weight, however being at the back you could see the seriousness of the injury as the Dorsal Fin was completely ripped apart.

We brought sandwiches and snacked through our breaks, however the night really went by fast as we were so awestruck by the whale, when sun rose up and we got to see sunrise for the first time in America, only 5 days before we left for England. At 8am some new volunteers came along to take over our roles, and we washed ourselves down and climbed back into the car, desperately in need of sleep.

The reason the whale found itself in our care was because it had been swimming towards the coast and had beached itself. Unfortunately, despite this, the pilot whales stick together through thick and thin, so the whole pod came to land, meaning 24 got beached and 21 died within the first 24 hours. A couple of others were apparently saved and moved on, while this one couldn’t be delivered to an aquarium as it was in such a bad condition, hence why we had to look after it until it was safe to move it.

Apparently the pilot whale now lives in the aquarium in Florida and it makes me feel proud knowing I helped keep the beautiful being alive. Plus one cheeky and slightly selfish side of me is happy that I got to swim with a dolphin and didn’t spend a penny!