Woken up at the crack of dawn on a Sunday morning, Me and Michelle got into superhero costumes, ready to face the world. I threw on my Bananaman costume and Michelle wore her superman clothing as we went out on to the streets and faced all the horn blowing and cat whistling.

We had to have a quick stop off at Tesco’s, much to their amusement, as I bought a pack of bananas. As we walked towards Hove, we felt paranoia kick in as we couldn’t seem to find anyone dressed in superhero costumes and we began to debate whether we had got the date right or whether this was all an elaborate plan to make us look silly. Eventually the superhero population increased as we surrounded ourselves in everything from SuperTed to a living telephone box. It wasn’t till a few hours later Michelle explained to me that the guy in the telephone box was meant to be Superman as he changes in the telephone box…I just assumed the guy was nuts, but fair enough. 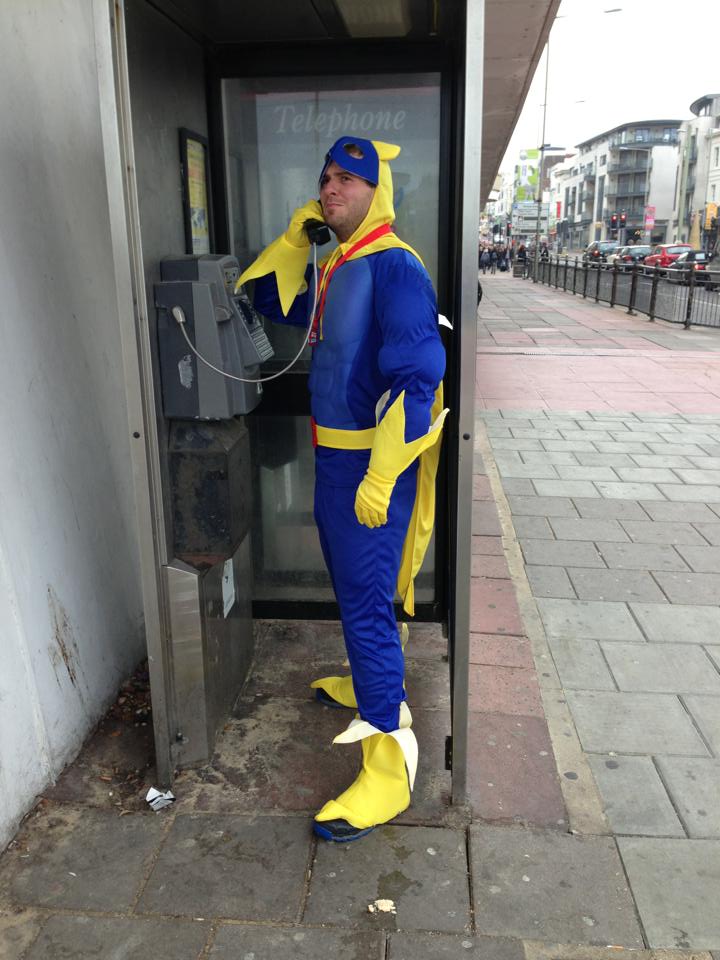 The Heroesrun is set up to help raise funds for schools to be built in Africa, a really great cause and a really fun day; I implore you to join in next summer! While we chose the 5k run, you can also choose the 10k run and there is a 500m run for the children, so they can join in. Not sure why the children get off so easily as I had a lot more energy and fitness when I was a nipper. 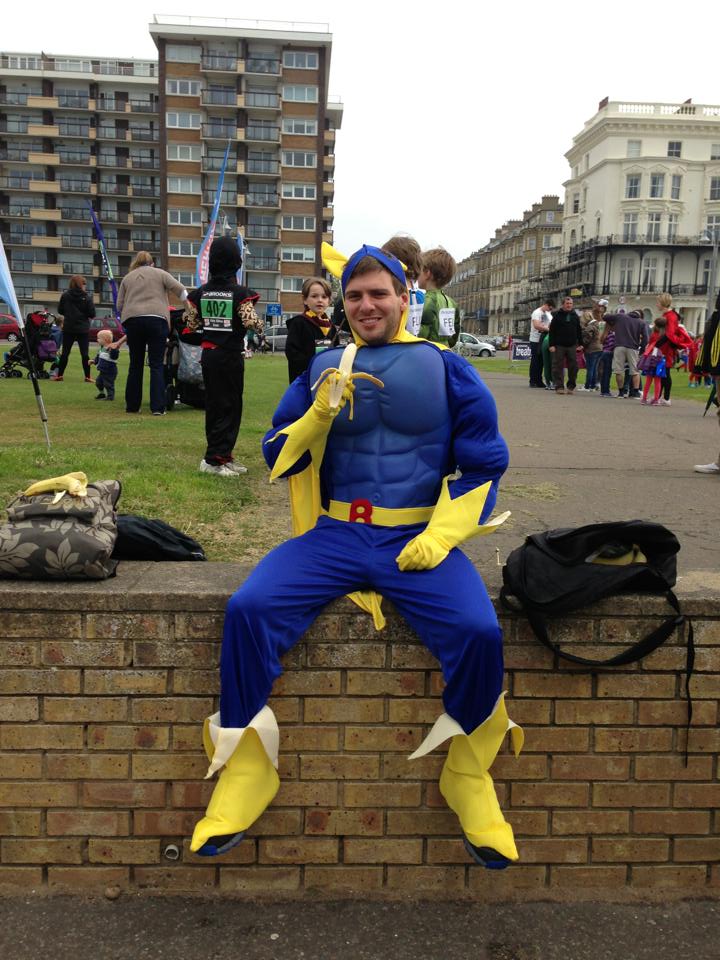 We began the race at a fair pace (I’m a poet and I don’t know it), trying to hold off cramp and aches. Once the finishing line came into sight, I felt a burst of energy soaring through my veins as I went into a gut busting run. Charging down the competition, and maybe slightly forgetting it was for charity, I charged past the competition and finished with gusto. 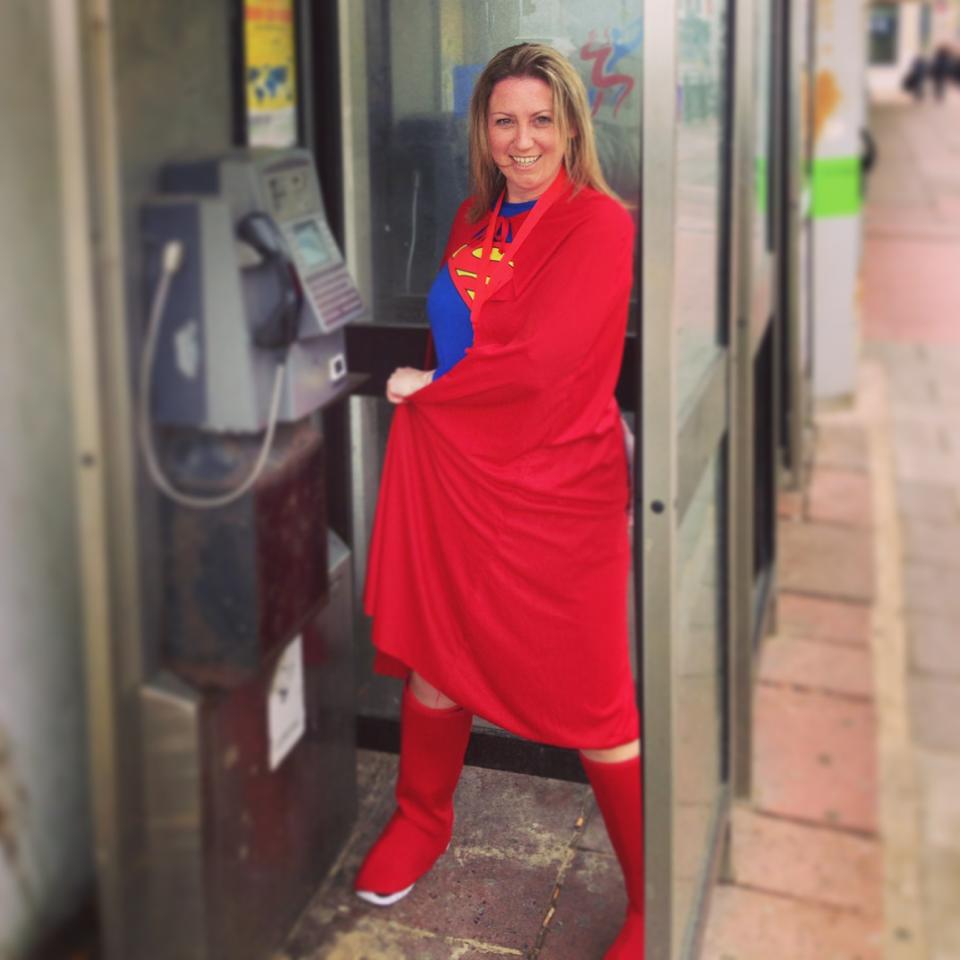 I loved the nodding, acceptance and random conversations when passing anyone else in a bananaman costume, as I looked upon them as brothers in arms. You do go quite a distance, all the way along Hove Lawns towards the wakeboarding area and then back again to reach the finish line.

The moment we finished, me and Michelle instantly set off towards the Fiddlers Elbow for a well deserved roast dinner and a pint. The pints did keep coming however, as that well deserved pint quickly turned into a full day bender. Walking around Brighton, we found the bit of land nearest the pier had been taken over by an outside bar (Spiegels Garden) as part of the Great Escape Festival. 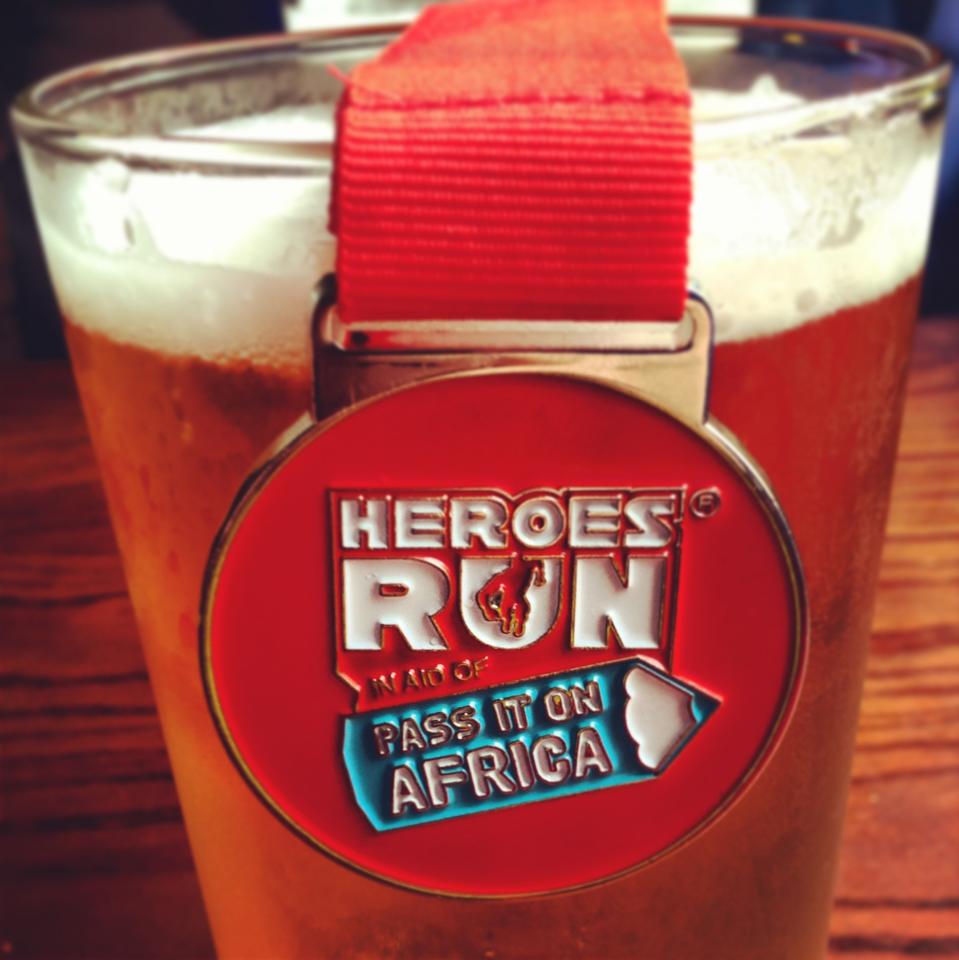 We spent a vast majority of the night taking photos with randomers and drinking a wee bit too much Heineken. The bar mainly sold a drink called Aperol, who were the official sponsors of the bar which was set up, while they were running a competition to win a trip to Italy for the best photo. Inevitably we took about 100 shots of us in ridiculous costumes and sent them off to Aperol! You can take a look through our random drunken adventures below: 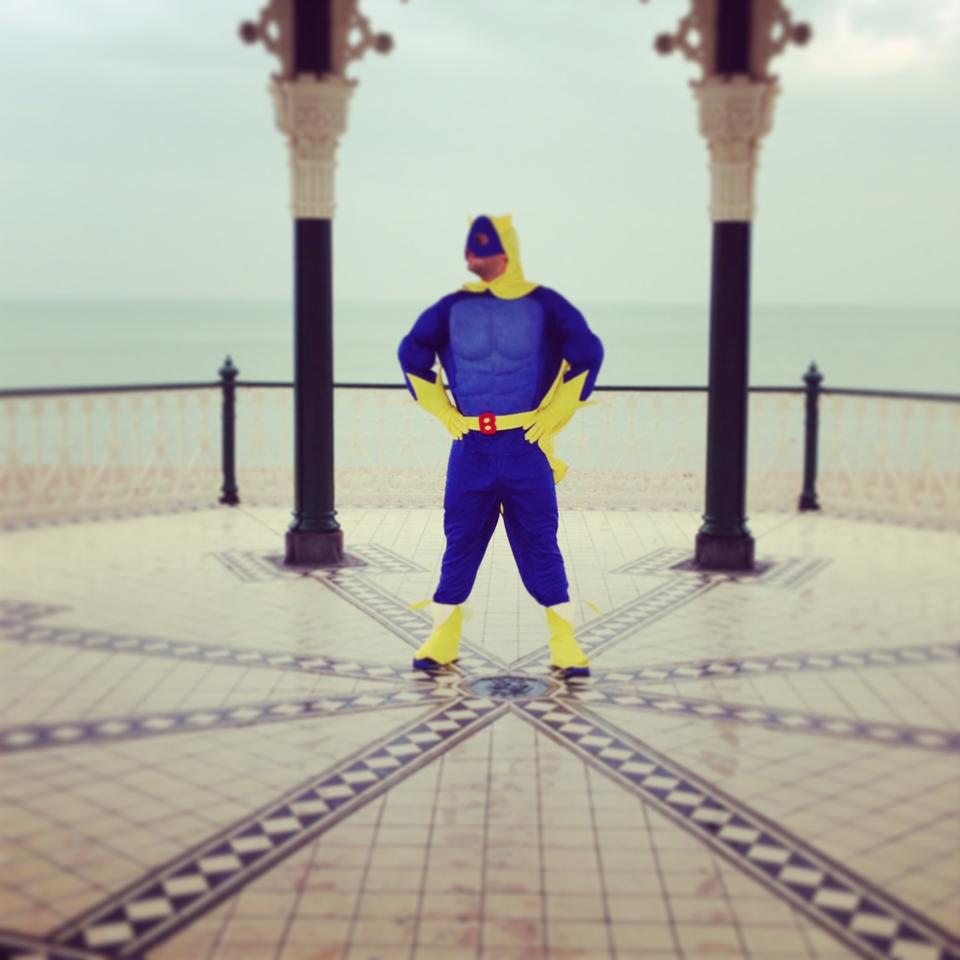 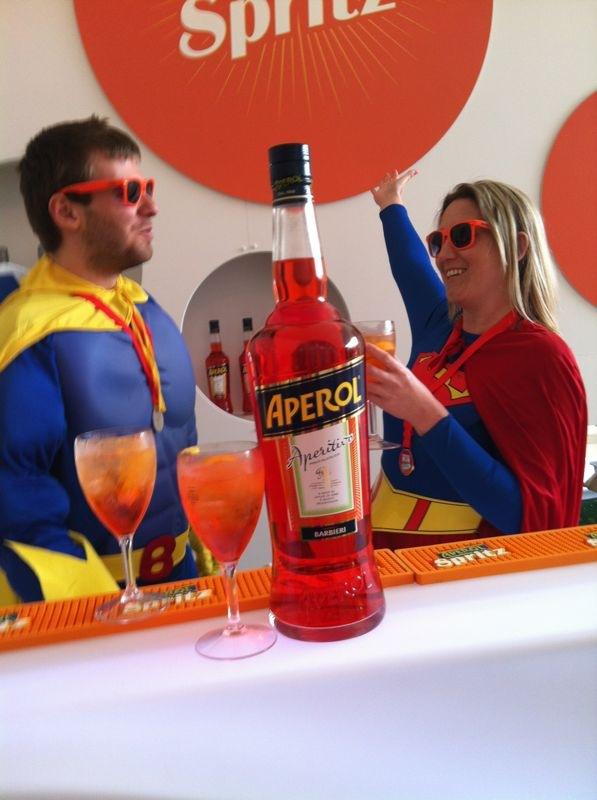 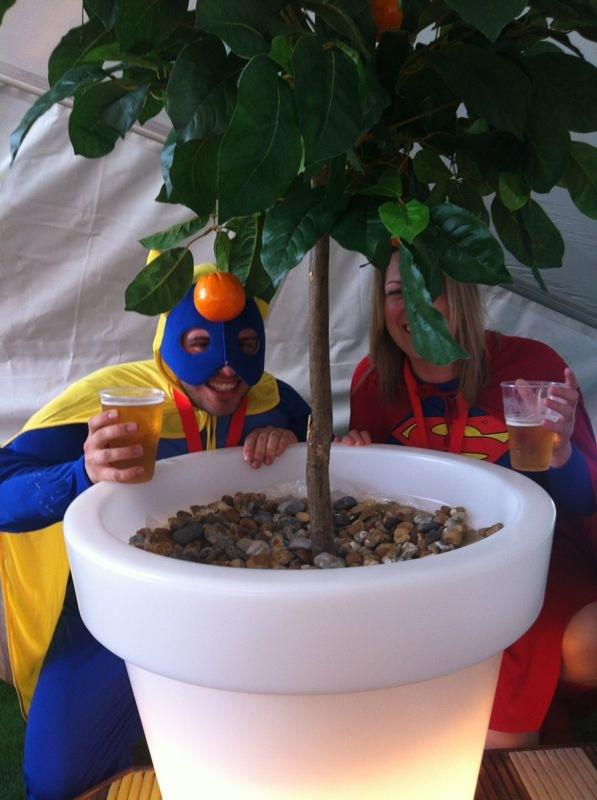 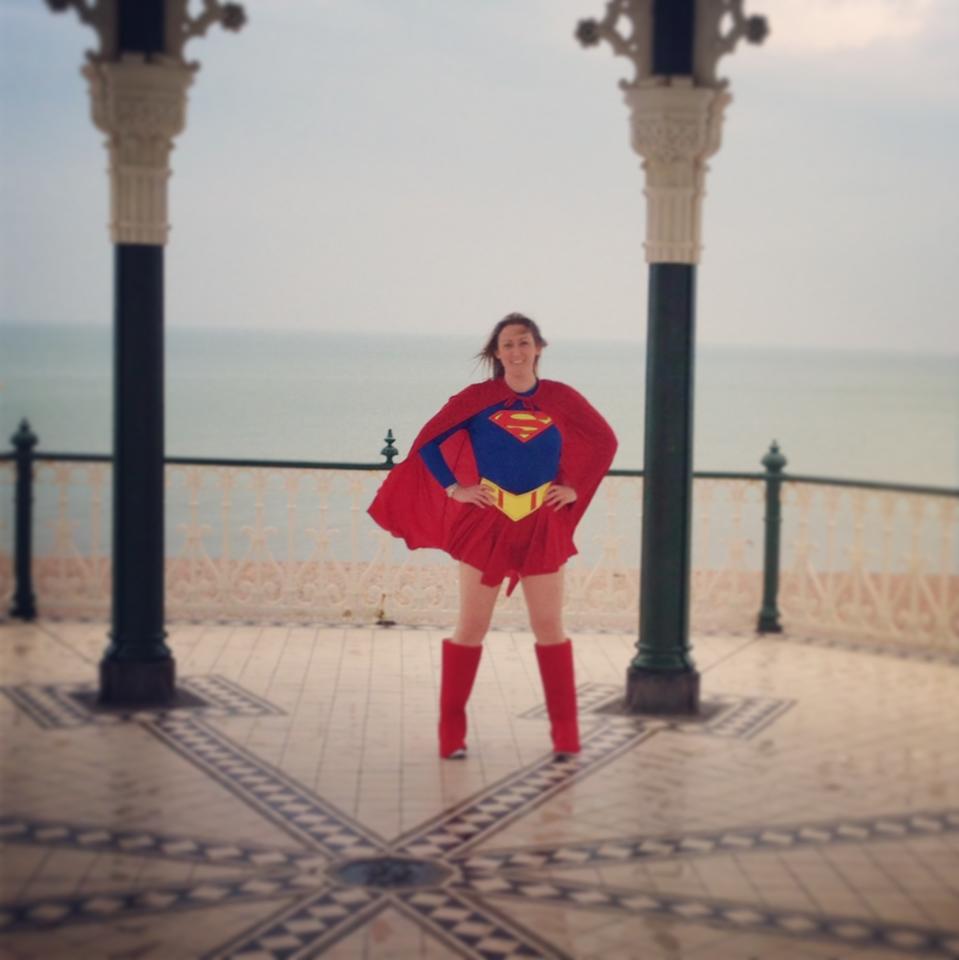 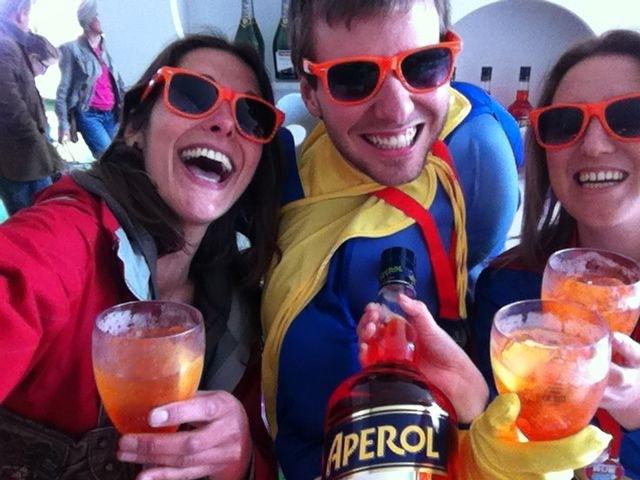 This always seemed like something we had to do, a great idea for a birthday activity in Brighton, as an early morning activity before the drinks come in. You’re also undoubtedly going to see some of Brighton’s celebrities.

The run isn’t too long in distance, making it quite achievable without any form of training (but I don’t recommend going with a hangover). Having said that, you do need to consider how heavy your clothing is. I saw some people in extremely thick costumes and the regret on their face was palpable.