You are conventionally meant to meet around 7am, in order to avoid the midday heat and also to escape some of the crowds that gather at tourist attractions, however we were coming from quite far out of Ella, therefore we met the guide at 9am.

The first port of call was Ella’s Rock, a mountain top which was pointed out to us from the train station. To get there we had to walk along the train tracks, something that made Raquel a little nervous considering we had just seen a train take off, but it left me exhilarated! 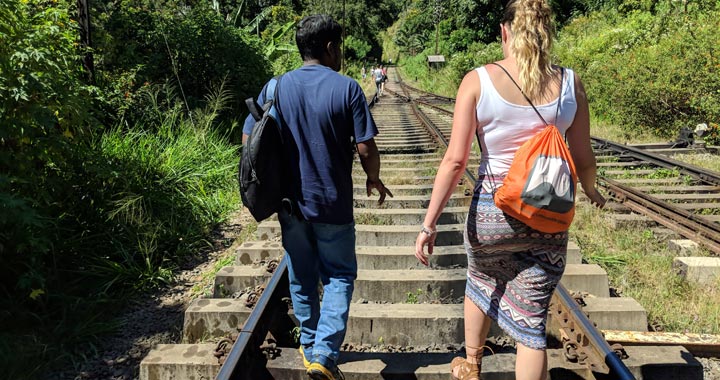 Off our adventure started. After spending the last week surrounded by Sri Lankan’s, it felt odd to see so many European tourists suddenly.

The walk was about 20 minutes, until we reached a break in the track where we walked alongside the tea plantation, where people were farming and selling crops to passers-by.

Five minutes on and we started the exciting, but exhausting walk up the mount. The journey was quite tiring and we hadn’t prepared accordingly, so I strongly recommend packing plenty of water. Having said that, there are plenty of people selling at the side, therefore it’s not the end of the world if you forget.

Sun tan lotion is another must, as we had to keep applying every 20 minutes as the sun beat down upon our heads.

It doesn’t matter what your fitness levels are, this will certainly leave you in a sweat. We got to our first viewpoint, which highlighted quite how green the area was. It was a beautiful sight, while I spent the best part of 10 minutes trying to get the perfect panorama (I know, I should have been enjoying the moment). 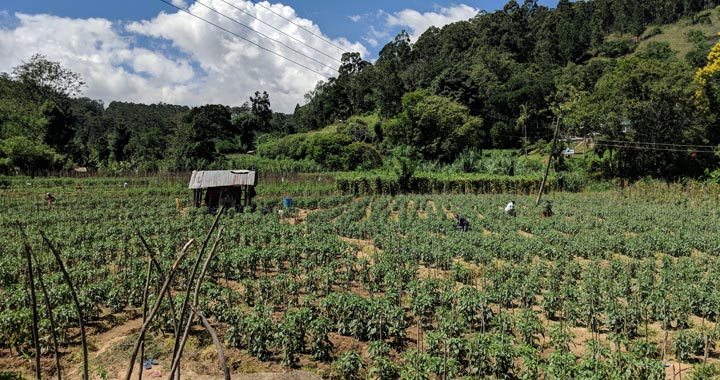 After drinking some water and taking WAY too many photos, we started venturing up again, however this is where it got quite steep and you could see quite a few people slipping along the way. Make sure to stop whenever you feel the need, don’t feel you have to get all the way up in one go. Considering the gorgeous landscape, it isn’t a bad thing to stop and stare.

We finally made it to the top, with the biggest grin on our faces, just about recognisable through the exhausted panting. People’s bravery (or stupidity) was tested as people sat at various proximities to the edge of the mountain side, with one even partly dangling off. My knees went a bit weak seeing them try this, but I made sure to get as close to the edge as I felt comfortable with. 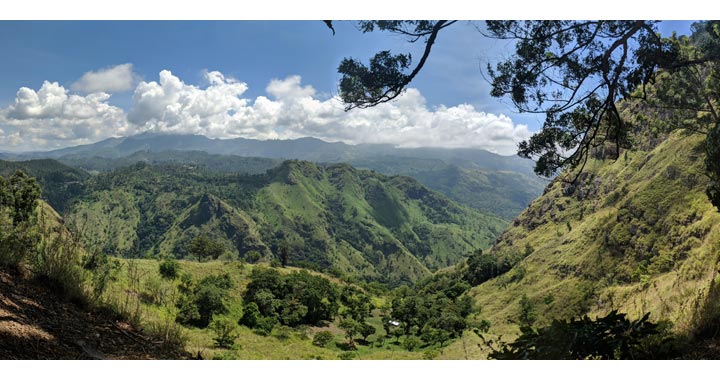 While we thought it was time to head back down, our guide then told us of the next viewpoint, “a mere 5 minute walk away”. Well 5 minutes might have been a slight understatement, being 10-15 minutes, but it was again worth the walk, as you got different shots of the landscape without as many tourists in sight.

Next, we thought the downhill part would be the fun part, but we were wrong. The next 30 minutes were spent trying not to slip down the hill, which we failed at quite a few times. An inevitability of climbing up is the journey back down and due to the dry climate, the sand meant it wasn’t as straight forward as some of the treks I’m used to.

One really cool thing that happened, considering we had failed to catch a train at this point in time, we saw a train coming along while we were walking along the tracks, so we had to jump into the bush and then wave at all the young Sri Lankan children who were dangling off the sides excitedly waving back at us. It was quite an endearing moment which kept a smile on our face for a good while.

Once we got to the bottom, complete physical exhaustion was kicking in, so we decided to be a bit cheeky and actually take a tuk-tuk to the next location, which was the Nine Arches Bridge. This is an incredibly famous scene of Sri Lanka and something I had forgotten we were seeing until the day, so I was insanely excited!

It certainly lived up to the bill, with picturesque views of this glorious bridge going through the mountains. Both right alongside and from further away, we managed to get some great photos with variety in angles. 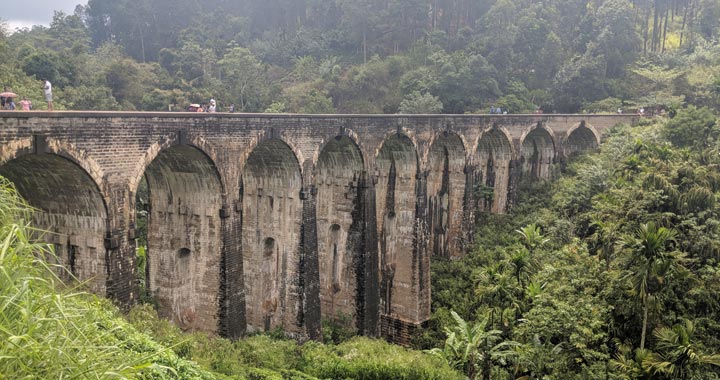 Some were even brave enough to walk along the bridge edge for a really great photo, but don’t expect fear-of-heights me and Raquel to be doing this, sorry! We’re scaredy-pants.

After taking snaps for another 15 minutes in a new location, we then had to head along the tracks, through a tunnel into the mountain, which was very exciting. A little part of me hoped we’d see the train coming, so we’d have to tuck into the side, which would be very exciting, alas this wasn’t the case.

The walk back to Ella station was about 20 minutes, before we said goodbye to our guide and then headed off for some much needed food and a pint.

I’d strongly recommend giving Ella Tours a try, both for day 1 and day 2, however just remember to pack your bag with all of the essentials, as we certainly fell short. Also, make sure you are wearing the right footwear, preferably something with decent grip.